A processor can support a maximum memory of 4 GB, where the memory is word-addressable
(a word consists of two bytes). The size of the address bus of the processor is at least ___________ bits.

Let G be a weighted connected undirected graph with distinct positive edge weights. If every
edge weight is increased by the same value, then which of the following statements is/are
TRUE?
P: Minimum spanning tree of G does not change
Q: Shortest path between any pair of vertices does not change
P only
Q only
Neither P nor Q
Both P and Q
Data Structures gate 2016 set 1 Graphs

The stage delays in a 4-stage pipeline are 800, 500, 400 and 300 picoseconds. The first
stage (with delay 800 picoseconds) is replaced with a functionally equivalent design involving
two stages with respective delays 600 and 350 picoseconds. The throughput increase of the
pipeline is percent ______________
Submit
computer organization gate 2016 set 1

An operator delete(i) for a binary heap data structure is to be designed to delete the item in
the i-th node. Assume that the heap is implemented in an array and i refers to the i-th index
of the array. If the heap tree has depth d (number of edges on the path from the root to the
farthest leaf), then what is the time complexity to re-fix the heap efficiently after the removal
of the element? 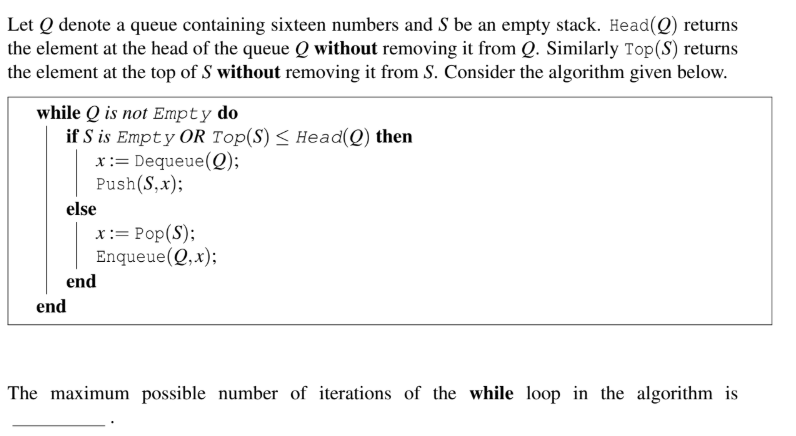 An IP datagram of size 1000 bytes arrives at a router. The router has to forward this packet on
a link whose MTU (maximum transmission unit) is 100 bytes. Assume that the size of the IP
header is 20 bytes.
The number of fragments that the IP datagram will be divided into for transmission is______________
Submit
Computer Networks gate 2016 set 1

For a host machine that uses the token bucket algorithm for congestion control, the token
bucket has a capacity of 1 megabyte and the maximum output rate is 20 megabytes per second.
Tokens arrive at a rate to sustain output at a rate of 10 megabytes per second. The token bucket
is currently full and the machine needs to send 12 megabytes of data. The minimum time
required to transmit the data is ______________ seconds.
Submit
Computer Networks gate 2016 set 1

Breadth First Search (BFS) is started on a binary tree beginning from the root vertex. There is
a vertex t at a distance four from the root. If t is the n-th vertex in this BFS traversal, then the
maximum possible value of n is _____________
Submit
Data Structures gate 2016